Describe Image (Pie Chart) – You will be given a pie chart. You are required to study the pie chart for 25 seconds and record your answer in 40 seconds.

If you find yourself short of words while explaining/describing an image, read our article on vocabulary required for ‘Describe Image’.

1. Look at the pie chart and describe it in 40 seconds.

The pie chart is about the distribution of sources of energy. The two graphs show that oil was the major energy source in the USA in both 1980 and 1990 and that coal, natural gas, and hydroelectric power remained in much the same proportions. On the other hand, there was a dramatic rise in nuclear power, which doubled its percentage over the ten years. To conclude, we can say that the USA has started shifting from oil to nuclear power.

2. Look at the pie chart and describe it in 40 seconds. 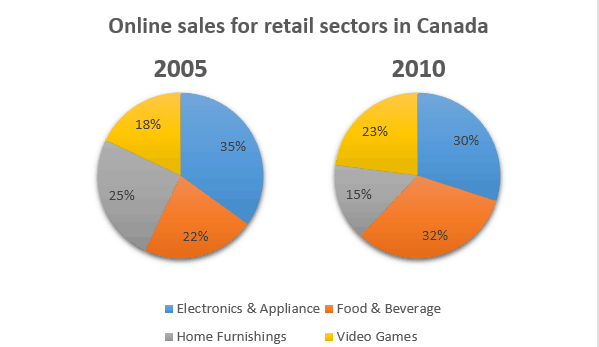 The two pie charts compare the percentages of online sales across different retail sectors in Canada in the years 2005 and 2010. In 2010, Food & Beverage captures the largest proportion of the online market with 32% market share while Home Furnishings holds the smallest portion of online sales. During the five-year period, we can see that people are preferring to purchase the video game and food & beverage online whereas online sales of home furnishing industry & electronics and appliance have fallen considerably.

3. Look at the pie chart and describe it in 40 seconds.

The given illustration compares the amounts spent on restaurant foods and on home cooking foods in four different years. In the year 1990, 90% of total food budget was spent on home-made foods but in 2010, a average family spent only 50 % of total budget on home made meals. It shows people’s habit of having meals in restaurants. To conclude, we can say that through more than thirty years, having meals in a restaurant whether in fast food or sit-down one has become very popular.