You should spend about 20 minutes on this task.

“Actions speak louder than words.” Do you agree or disagree with the statement?

You should write at least 250 words.

***Note: This PTE Essay was recently asked in the PTE Academic Exam. 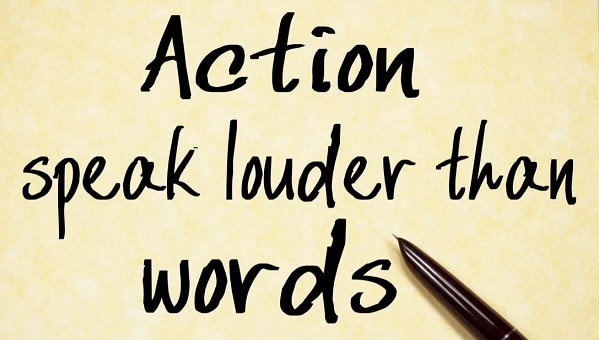 People either communicate with their words or through their actions. Words are merely sounds uttered by the tongue. The action is what puts the meaning into the words said. I completely agree with the statement “Actions speak louder than words.”

To say something and to do something are two different things. It is a well-known fact that people often do not do what they say. It is why people value hard work more than mere promises. For example, politicians make many heart touching promises before elections. But after the election is over, and they get elected we all know how their action goes.

Secondly, actions depict a person’s character and personality. What someone does and how he behaves in that particular situation reveals his real side. For example, if a town next to you experienced a flood, a real hero would do what he can do within his means to help the people instead of only feeling bad for them.

In conclusion, actions carry more meaning and importance than what a person says. A person must hence, think twice before saying anything because words can be easily expressed but doing it, in reality, takes real effort and dedication.

Influence Of Media On Society

Words convey an offer or invitation for some action whereas performing the action is what completes a task. The only reason behind the famous phrase that “action speaks louder than words” is the fact that taking action brings the destination closer. Hence, I also firmly believe that actions speak louder than words.

In any environment, be it work, household chores or national politics, there are always people who only talk about taking actions and the ones who get the work done. Though it is essential to convey the message of the action to be performed to all the stakeholders, it is imperative that the task is worked upon since the spoken word is a double-edged sword where the authenticity of the spoken word can be questioned later by work performed.

If you have ever worked at a job where there is a lazy boss, then you can relate to this. The employees always look up to the upper management / the boss for motivation. When they find their boss doing nothing & unmotivated then employees replicate the same traits. But when the boss gets their hands dirty and shows the passion they have for making things better, employees are more motivated to work and feel more passionate about what they are doing.z

Accordingly, even though the spoken word is a vital step towards proper communication of the actions that need to be performed, it is much more important that timely performance of the required action is taken.