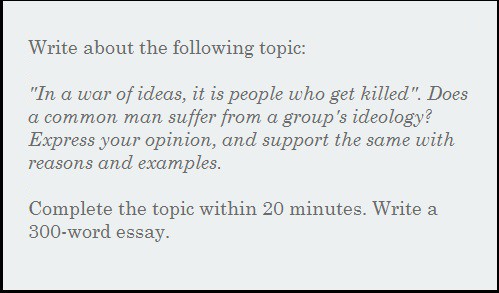 It is a well known saying and I personally support the statement. Time and again humankind has faced mass destruction owing to the difference in ideas and beliefs. So it is rightly said that group’s ideology can sometimes cause suffering to a common man.

A good example is this regard is September 11, 2001, attack in the US which killed over 2900 people & injured 6000+ people. It caused an infrastructural damage of over $3 trillion. The impact of the attacks affected both society and culture in general. As a result, general public live under constant fear.

The sufferings of common man in such incidences can not be expressed in words. It has been observed that in the clash of opposing ideas, ideologies, or concepts it is the common man who suffers the most. There are many nations or groups who use ‘war of ideas’ as a tool to promote their interests abroad.

The second example in this regard is of government who sometimes roll out policies which are not in favor of the general public. Despite the negative response from people, such projects find its place in government’s agenda. Such decisions are forced onto the public. Such cases form the perfect example of a common man sufferings from a group’s ideology.

Usually, a group’s ideology is followed by the majority of the population, governments, or other groups who find common concerns and interest as of group. Such groups tend to work towards their member’s betterment and gain. For example, National Organization for Women (NOW) mission is to advocate for equality and full societal participation for women.

Many people have lost their lives and will continue to do so owing to the differences in the way of thinking. It is the common man who has always been suppressed and suffered. In future also it will continue if ideas are carried out before knowing its aftermath.