Describe Image (Table) – You are required to study the Table for 25 seconds and record your answer in 40 seconds.

Don’t forget to read our article – ‘Tips & Tricks to describe an image’.

1. Look at the table below and describe it in 40 seconds. 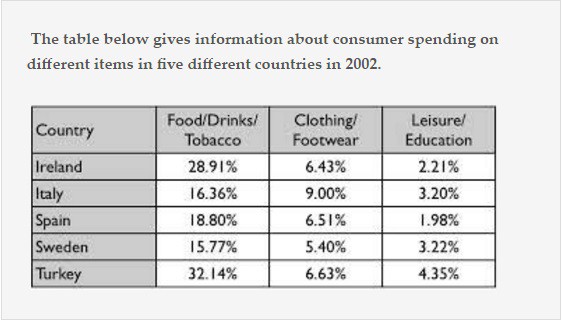 The table shows the portion of national expenditure of 5 countries in three different categories – food, clothing & education in 2002. In terms of food/drinks/tobacco, & education/leisure Turkey spent the most, while in terms of clothing/footwear, Italy spent the most. Overall, all countries – Spain, Sweden, Turkey, Italy, Ireland spent most on food/drinks/tobacco & lowest expenditure was on leisure/ education.

2. Look at the table below and describe it in 40 seconds.

The given table shows data on underground railway system in six metropolitan cities namely: London, Paris, Tokyo, Washington DC, Kyoto and Los Angeles. Tokyo railway has the largest passenger using the system & Kyoto railway has the smallest passenger base. Overall, it can be inferred from the presentation that most of the early built and longest rail routes have significantly higher number of passengers, compared to modern and short length transit systems.

3. Look at the table below and describe it in 40 seconds.

The table shows the number of children born to women aged 40–44 years in Australia in 1981, 1986, 1996 and 2006. Overall, by age 40-44 years, the proportion of women who have had three or more children has fallen considerably since the 1980s, while the proportions who have had no children, or only one or two children has increased. To conclude, we say that women in Australia are preferring one child or two children at most.