PTE Academic Describe Image (Map) – Look at the map below. You are required to study the Table for 25 seconds and give your answer in 40 seconds.

In case you are facing difficulty in ‘Describe Image’, you must read our article on ‘Tips & Tricks to describe an image’.

1. Look at the map below and describe it in 40 seconds. 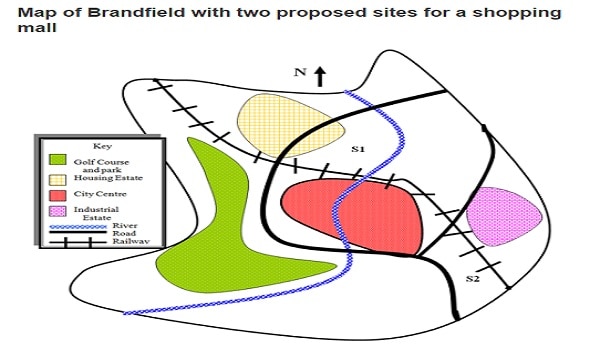 The depicted map illustrates two possible areas for a shopping complex in the city of Brandfield (overview). The first possible site for the shopping mall, S1, is located north of the city & it is next to a large housing estate (point 1). The second site (S2) lies to the southeast end of the city and is fairly close to the city center, but it is near to an industrial estate rather than housing (point 2). There is a main road that runs through the city and is close to both sites (point 3). There is a large Golf Course and a park on the west side of the city that prevents this area from being available as a site (point 4). The city planners should prefer S1 as it will be more convenient for the residents (conclusion).

2. Look at the map below and describe it in 40 seconds. 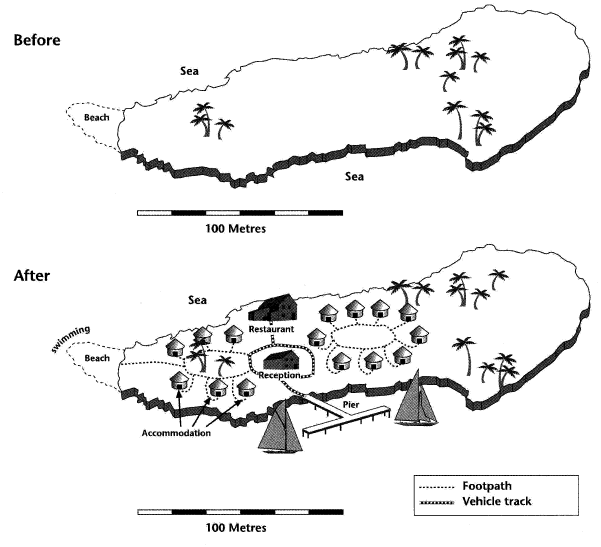 The given picture illustrates a small island before and after it was developed for tourism (overview). The island is 100 meters long, has palm trees, surrounded by the sea and has a beach at one of its end (point 1). However, turning to the second picture, we can see that most of the empty space has been occupied to construct new facilities (point 2). Facilities like accommodations, restaurant, swimming facilities etc have been constructed without affecting the natural resources that much (point 3). There is also a short road linking the pier with the reception and restaurant, and every other area is connected via a footpath (point 4). Overall, tourism facilities made greater development on this island, while it became congested (conclusion).